What I’ve learned from spending 1640+ hours on Kajabi 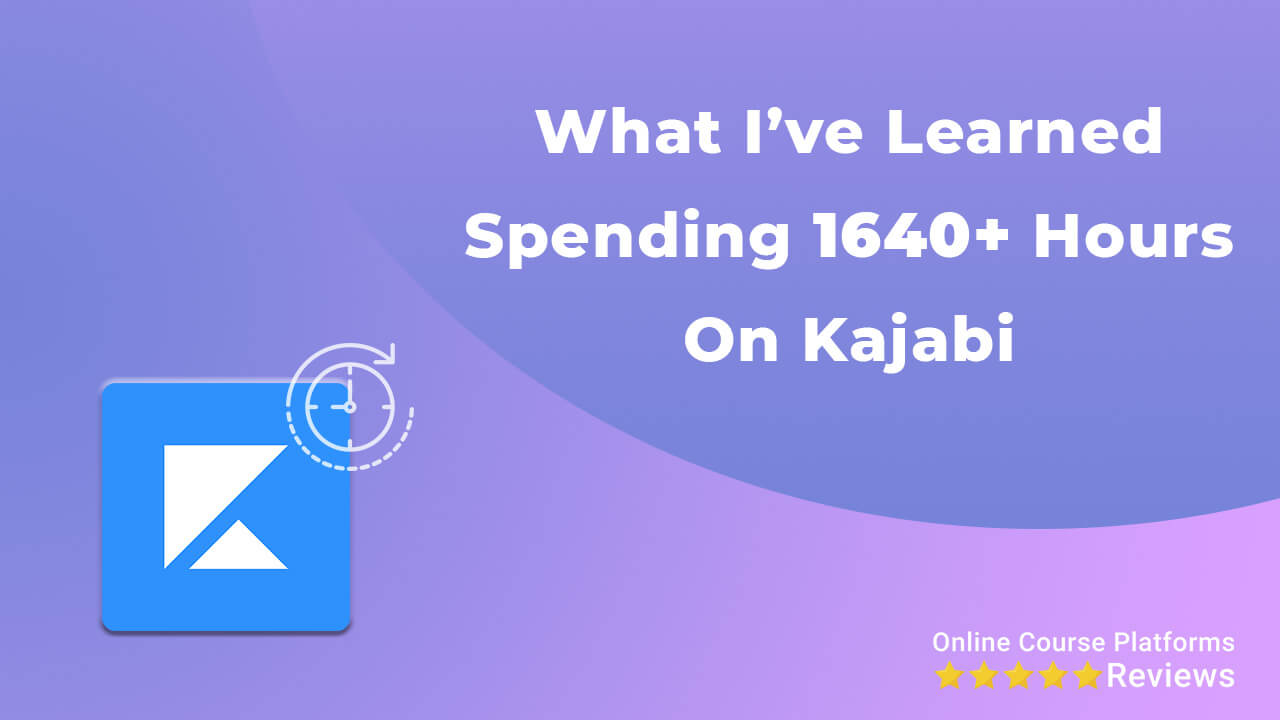 One of the worst feelings that can happen after making a decision is regret.

And regret doesn't mean that you made the wrong decision: most times we make the best decision based on the current information we have.

That's how we make rational choices in our lives.

As a course creator, regretting choosing a particular platform can happen later. And the later the worse too!

But you're just making decisions based on the information you have when looking at all the different online course platform options you have.

Kajabi, just like any platform, has a learning curve. And some things you may only learn after using it for a while can make a difference in your long term decision to stay on the platform (or not start with it).

I've spent well 1,640+ hours on the platform for over 45 different clients and accounts on Kajabi.

I've also probably spent at least half of that on the Kajabi Facebook Group and seen the kind of things users wish they'd know before or didn't know was possible.

So this article is about letting you in on the kind of things you'd only know after spending so much time on the platform - the good and the bad.

Kajabi: an out-of-the-box all in one platform?

Beyond trying to list out everything that can and cannot be done in Kajabi, I want this piece to stand out the test of time.

And also because most after-purchase comments from users (good or bad) can really be addressed talking about this:

"Can [insert very specific demand/feature] be done in Kajabi?"

Now sometimes "yes" is an obvious answer. When someone asks about whether or not a free trial is possible, an evergreen events, even advanced automations...

But again, this is about answering the questions you don't have yet!

And to these more advanced questions the answer is almost always: Yes, but...

By using the Pro version of Kajabi, you will have code access.

What that means is that you can start editing the core of the technology and tweak it to your liking.

Note that the platform is still self-hosted and therefore you don't actually have access to the servers on which it sits. (like you would with your own WordPress for example)

But with code editing, some more complex questions can turn into a yes:

> Can I password protect a standalone page? Now you can

> Can I change my course theme to adapt the layout how I want? Sure you can with some code magic

> Can I have a custom search bar inside my course? Yup

So the question slowly transforms into: Yes, but you need custom coding.

In theory, pretty much any customization is possible inside of Kajabi (again, with code access).

That doesn't mean anything you can dream of like advanced features that would necessitate core functionality added - but anything can look how you want in the front-end.

But this begs the following question:

Should you want everything to be editable?

Whether you're already a Kajabi user or still on the fence, here is one of the main selling points that's attracting you: Kajabi is an all-in-one platform where you can run your online course business ?out-of-the-box?.

What that means is that, in theory, you shouldn't really need additional tools or a developer?s help to use the platform.

This promise I can confirm is true for most course creators.

Someone wanting to have a fancy carousel block on their sales page and not natively being able to, doesn't mean the platform is lacking.

And asking a platform to bend to your every whims and folies is not how successful course creators and entrepreneurs think.

Even if, as mentioned before, it is theoretically possible to have it your way in the end, it's probably not worth throwing a bunch of money on a developer for it.

Again, one of the main selling points of Kajabi is the fact that it's easy to use and anyone can learn how to use it themselves.

Their team is constantly having to balance these two things: customization capabilities and people wanting crazy features that wouldn't really help them - making most other users confused by the complexity of the platforms if these changes were implemented.

Customization vs ease of use is a dilemma most ?out-the-box? platforms have to deal with, and it's important to know that this is what you're signing up for.

Because whether that's not or in the future, Kajabi will always favor user experience and ease of use, because that's what their core target audience wants.

There are some pitfalls that - at the time of writing - you definitely want to avoid but might actually seem like a great idea at first.

Pipelines are basically the essence of funnels in kajabi. These are folders containing a number of pages, emails, event, automations,...

To help you, in theory, keep everything neat and organized.

As an experienced user, I do think these are good and useful tools in certain situations.

But, Pipelines and pre-made templates tend to confuse most Kajabi users more than anything else.

The reason for that is again something you'd only realize after spending quite some time on the platform.

Pipelines will prevent you from doing the thinking about the different pieces that need to come together.

Making it confusing for you to understand how it all works and to edit it later.

So for most people, it's just adding an extra layer of things to understand: Pipeline link, stats, how the different pages and automations work together,...

The main thing to understand is that Pipelines are just a folder of standalone elements you can create and set up separately (and actually understand!).

In the same category, using some of the default page - like the Homepage - is often a mistake.

Just like with Pipelines, you'll get a lot more flexibility by setting things up from ?scratch?, in this case building a standalone page and changing the default settings to make it your Homepage.

My point here isn't to say bad things about the templates and pre-made solutions Kajabi offers inside the platform. Just like anything else, these can be useful and save you some time if used wisely.

But unless you've had some time on the platform under your belt, you're better off trading that little bit of time in the beginning to learn the kinks, than jumping too far ahead and heading for some trouble later!

The community and support is truly the best - and paying a premium is worth it.

One of the reasons why Support & Community is one of the 4 criteria of any platforms we review on this website - is because it matters? a LOT.

And the longer you use a platform, the more it does!

In this regard, and after having countless interactions with the support and Kajabi team, as well as other Kajabians - I can attest things only get better and better.

But I wanted to stay as objective as possible.

So I did a little experiment to verify if my impression was based on reality.

I've poured through many comments in 3 Facebook groups of the top 3 all-in-one platforms out there: Kajabi, Kartra and New Zenler.

I've pulled out 3 examples of the type of answers you'll typically get for a question in each:

Conclusion? Most answers you'll get in New Zenler (full review here) are going to be from the official Zenler account - with no human face and visibly poor english and spelling. You may indeed get the response to your question in some form? but it feels more like a support forum than a community.

Kartra's answers from a Moderator of the group (read: team member) are rarer. But when they happen they are usually very helpful. What tends to happen most time however is that a member of the community will give their take on your question and point you in the right direction.

Lastly, in the Kajabi group, you'll almost always get an actual team member - with a picture and the company?s name on their profile - to respond and celebrate with you.

Not only that, you can verifiably see a lot more users and experts answering your question with detailed explanations and feedback.

To be 100% fair here the Kajabi and Kartra group are a lot bigger than New Zenler (20k+ for both versus only about 3k for New Zenler).

Conclusion: What Kind Of Long Term Deal Do I Get With Kajabi?

For most of the things that I've mentioned in this article I want to point out a pattern. That's the fact that as long as you understand the philosophy of the platform (customization vs ease if use) you will not get a bad surprise using Kajabi in the long term.

Most regrets that come with users moving away from the platform are based on false assumptions and misunderstanding of their own needs. Not be harsh with those as this kind of information is sometimes not easy to find.

To believe in Kajabi as a long term solution for your online business and courses, you have to understand their values: user experience before all, a great sense of design, a strong community feel.

If you believe and understand that then you can foresee the future and direction of the platform as it evolves and can decide to get along for the ride.

Kajabi Blog – What You Need To Know

Kajabi Blog – What You Need To Know

We Review The Best Tools To Sell Online

Courses... Want To Receive These?

The upkeep of our site is made possible thanks to the commission we get whenever a visitor completes a purchase through sponsored affiliate links. Financial incentives may impact the ranking itself and/or the score given, also we strive to provide an unbiased opinion based on experience. The scoring and rankings are not regulated in any way and should be used by readers as guidance only.